The weekend just past

Looked at the photos from the weekend and saw that we did do quite a lot. 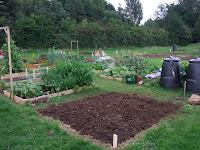 anent bed'. We're going to have it raised like the rest and just put a path across it, a racy diagonal I think! It will have asparagus and rhubarb in it and some little fruit bushes/trees etc. Andrew has it sorted out in his head and it sounds good, though we'll have to wait 2 or 3 years (yes, years!!) for the asparagus to mature. (I love that stuff, is it really true that it's an aphrodisiac? I had asparagus and thai chilli soup on the my wedding day, before the ceremony...... ). Andrew worked so hard, fighting against the on coming bad weather but he got it all done and the soil looks good - we've been so lucky.

I cut all the grass with our wee crappy push mower from Lidl, it works the legs and arms alright! We have so many beds that the majority of my time was spent cutting round the edges with the hedge scissors (okay, i know that's not the right word but I've been sitting here for 3 mins trying to think of the right word and it ain't coming). It was worth it though, the grass was just making it so messy looking and with all the rain, it being long, meant our ankles (and Maggie's whole body) were always soaked. Lucky for us though, we have wellies - she doesn't and hates sitting in the shed; she can't inspect everything we do and there's less chance of a passing tickle.

ed on my triangular flower beds by the shed. Weeding - which had been neglected badly and planting daffodil bulbs - lots of them! We're (this is a bit sad) 'privileged costumers' at a garden center a good wee drive away, so I got a bag full of Carlton Daffodils for £1 instead of the usual price of £2.99, oh yeah. Okay, I confess, I planted about half of them, the ground there isn't the easiest the dig in when it's wet, so Andrew was called over, that's what husbands are for - right?

I refuse to think of the winter coming and instead have started to plan for spring. I also got Andrew to put up a wee bit of picket fencing we were given a while back. I've got him to pr 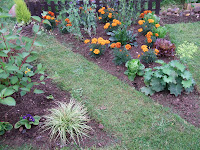 omise me more for the whole plot, he's going to make it, not like he has anything else to do!!!! The wee flower beds are doing great. They were at one point, supposed to be mainly a wild flower meadow but the seeds just didn't do anything, so I took extra plants from the garden at home and plonked them in and it's turned out for the best. We also shoved some extra lettuces and a little obelisk of peas. I'm very pleased with the dogwood, it took a while to settle in but it looks good now and the stems are going a beautiful red and it's flowering. We'll use those stems next year as supports as well, so pretty and functional. 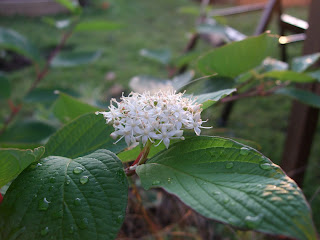