Ahh sweet, sweet 24a, the first plot we had, the first plot to have a sod cut in the whole blasted gardens. Our little haven and the plot that introduced us to the marvel of Ecotherapy, the taste of non pickled beetroot, the intense hatred a person can feel for a slug. Oh 24a how you have given so much to us; many chills, blisters, stings, heartache, fruit, vegetables, laughs, friends and a blog.....

Now, 5yrs on we are making changes for the better; 24a is getting a face lift to make it look more beautiful, safer and slightly more important, productive! You deserve it.

This is what is happening..... I got A to draw the plan as being an archaeologist he does it very mathmatically and to scale and what not; as an artist I do it all freehand and like to colour things in (nothing is ever in the exact place or the exact size etc). 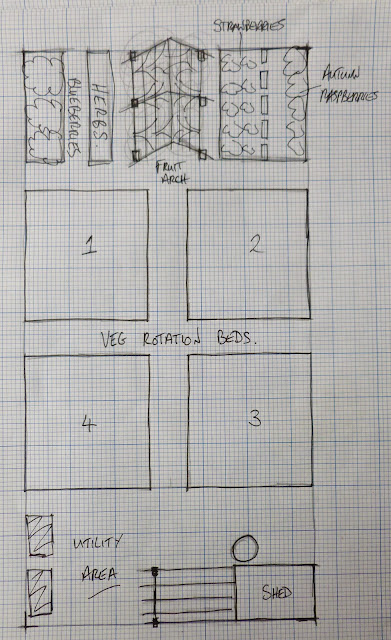 There's really nothing happening at the allotments for us at present. The ground is sodden and anytime there has been a good day recently we have been doing archaeology stuff instead as A. has lots on at the moment.

We would love it to be drier and then the garlic could be planted and we could continue with the improvements around the site but Mother Nature has the final say on all that sort of stuff. Plus this weekend we'll be far away in Cookstown as I do a big 2 day Christmas Craft Fair with my Cherry Blossom Tattoo Photography teeny tiny business.

Ironically the sun is shining as I write this but it's blasted well freezing and it's that sort of cold that gets into your bones and stays there for hours after you have come home, had coffee, wrapped the blanket round you, turned the heating on and started up the gas fire...I hope you are having more luck than us at present and can still get out there. I shall try to get caught up on my blog reading today :)

No amount of hyperbole could describe my hatred of Winter. I despise and fear the damp, dark, dreary days and the cold that seeps into my very bone marrow. If I didn't already have chronic depression I know that I would be a SAD sufferer. But, and it's a big but (I like big butts and I cannot lie, hahaha), I have found a small fragile flame of hope and warmth. It's like a little candle flame way in the distance sitting low on the ground in the midst of an eerie, misty country line, but it is Hope. 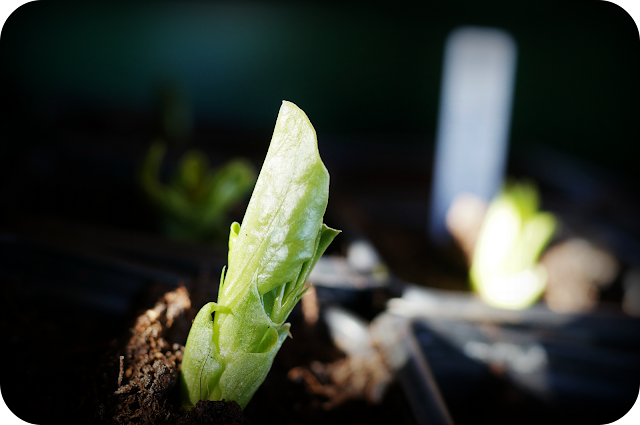 Yes, new life is here, the Spring lies within these babies in the greenhouse; the promise of a happier time with more sunlight and warmth in our days and I could cry with relief at the sight.


"Au milieu de l'hiver, j'ai découvert en moi un invincible été."
- Albert Camus
(in the depths of winter, I discovered there was in me an invincible summer)
Posted by Carrie at 21:21 10 comments:

Happiness arrived in a cardboard box last week all the way from America. I received some homemade jelly from the very beautiful and extremely generous Anne - Pomegranate Jelly. Oh my goodness, it is utterly divine. I have a new food crush *blush*

I remember it so well (I don't know why); I was about 7 and there was a lady standing in the fruit and veg aisle at the supermarket with one or 2 Pomegranates cut open to reveal those amazing little pink jewels within, she was encouraging people to try it. I was entranced, took a few seeds and popped them in my mouth - never before had I tasted anything like it and in fact I hadn't tasted that flavour again until this delicious jelly arrived. 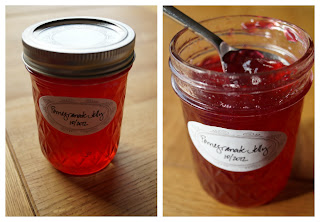 It's a little like cranberry jelly but not, it's more fragrant and a little bit sweeter but it hits lots of spots on the tongue at once that don't usually go together in the way cranberry jelly does. I guess that's the only way I can explain it.

Oh but I am in love and Anne (angel that she is) also sent me a bag of my favourite Sweet Pea seeds 'Cupani' and some vibrant Cosmos in sunny orange, oh just perfection. I really hope they like it here in Carrick, I would love those colours in a vase together, how exciting to the eye!

So publicly I say - thank you Anne. Thank you for introducing some exotic-ism into my dull Autumn days and for giving me seeds to aid dreams about Spring and Summer 2013 - a truly priceless gift xxxx
Posted by Carrie at 19:48 6 comments:

Tidying up and harvesting

You would be so proud of me last weekend when I went to the lottie on both Saturday and Sunday :) The weather was doing okay so we needed to spend time there before it's just raining all. the. time. ... November, how did it get to be November already?!

Anyway, I started off in a good mood > 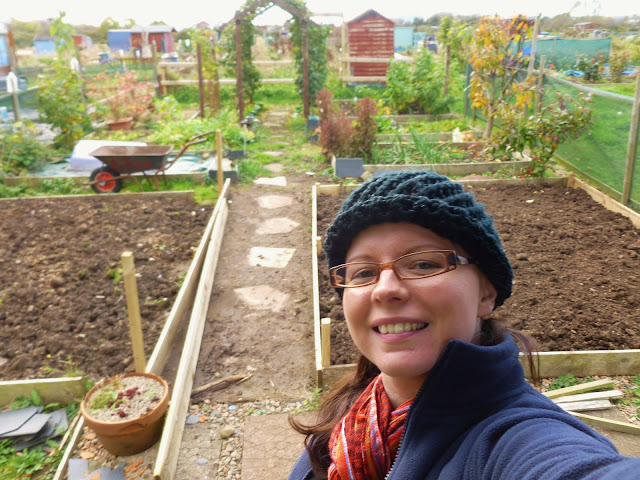 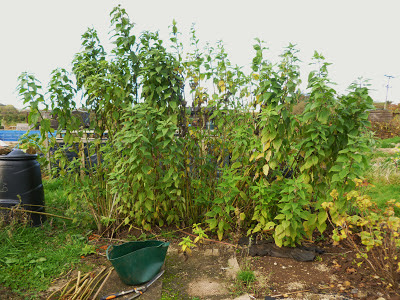 It put me in an even better mood! Hahaha, there is nothing better than constructive destruction, it's my favourite activity. This mess is our Jerusalem Artichoke row and for a while now it's just been allowed to do whatever because basically, it's way up there at the end and it's easy to pretend it belongs to someone else *blush* But no longer, I have taken ownership of the disaster area that has been 14b and it is slowly being tamed. 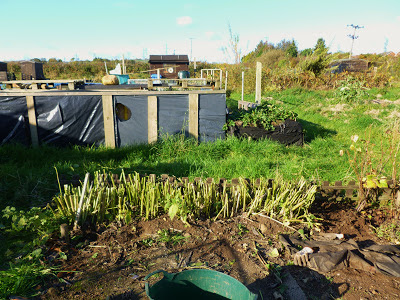 Plus this is all from one plant. I know! no need to screw your face up, they aren't pretty. They have a look about them that only a mother could love, well I am that mother and I love them, see their potential and will have them roasted up and eaten soon. (Disclaimer - I do not have human children but I do realise that you don't eat them) 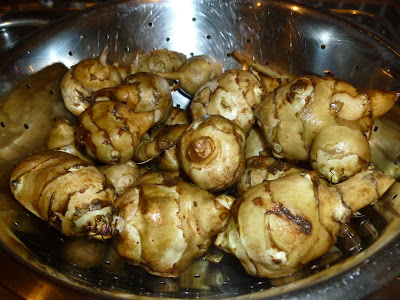 So as always happens to me when I do a big clear out and I have my head phones on (lucky it was just me and Andrew at the plots - I was singing Emeli Sande quite loud and probably very badly indeed) I got carried away. I started pulling a few weeds up and then ended up destroying one of the worst weed patches we have ever had. Up there between 'the big bed', the compost bins and next door's shed isn't somewhere we tend to go often, especially as this year the pumpkins were in a different place, not that bed.

So I shall very happily and with a bit of pride it must be said, show you a before and after :) There is more to do but I had so many weed flowers up my nose I felt dizzy and we have also decided that we need some sort of netting fence/ windbreaker up there too so why dig it twice? 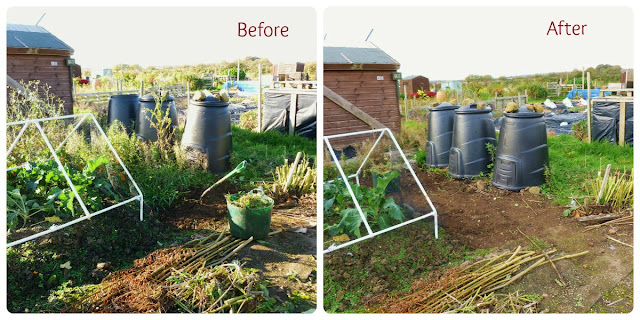 On Sunday I moved on to the bottom of 14b and ripped out the beans. Oh it was joyful to grab handfuls of bean stalks and rip, tear and pull them from their bean pole wigwams. I imagine it all looked a little horrific from afar, as if I was fighting for my life, but nope I was just having fun. 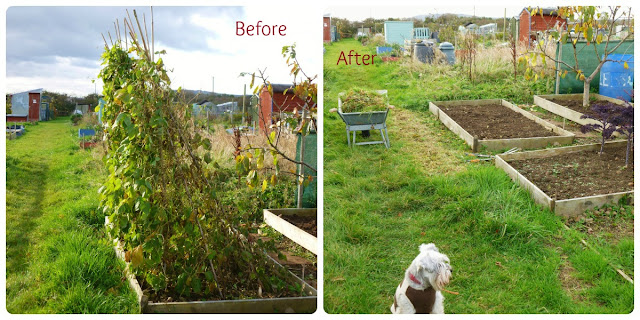 We got some Borlotti beans from the far wigwam but not much, it was a pretty disappointing year really. I have saved seed though for the first time ever off this. And Andrew has eaten a good handful in some soup and he's still alive, I think he actually likes them. 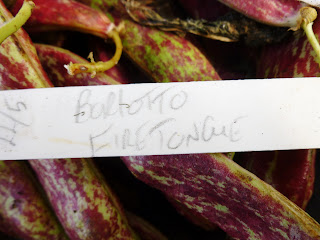 The runner beans? They all just went into the compost, seriously there are only so many a person can eat and they just kept coming and going stringy really quickly, it was a battle, they won. Though I guess I had the final say.
Posted by Carrie at 20:54 8 comments: