There are days when everything just aligns perfectly and a hike is the only thing worth doing. On Saturday the sky was bright (if not occasionally blue!), the wind was gentle and the temperature a just-comfortable-no-coat-necessary degrees.

On the flip side (there's always a flip side) I had had a terrible nights sleep, was up early and feeling so heavy and there's an hours drive to get to our hiking point = snoozy, stiff and slightly grumpy me. I fatigued very quickly this time and my yoga injury of a recently strained hip reflexor played up big time. So I was in agony. And forgot my painkillers - stupid, silly girl.

But I thought I'd share some photographs of the beauty we were blessed to witness. Toby had the best time ever and was rewarded with a while off lead in a quiet part of the forest. Andrew used some new pieces of equipment so he was happy and I finished and didn't die = excellent day all round 😃 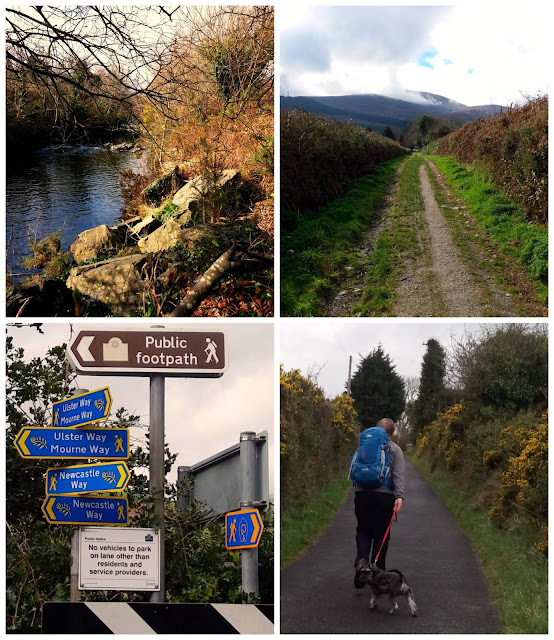 This is a little example of the walk up to the Forest, these paths are part of many different official walks including the Ulster Way, The Newcastle Way, St Patrick's Pilgrim Trail and The Mourne Way! It's lovely here with a great looking Scout Camp and many different styles of houses and farm animals. For those, who don't know gorse - it's the yellow spiky hedges that are all over Ireland and the flowers smell of coconut = yum. 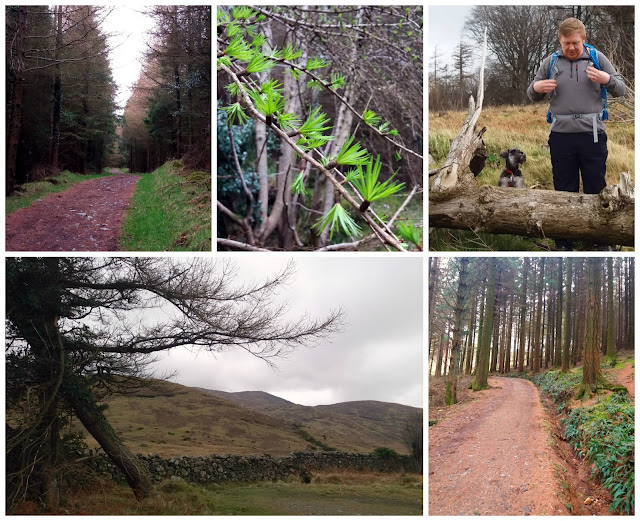 And so, into the Tollymore Forest Park. I love this place and seeing it slowly come back to life is so exciting; just look at the vibrancy of the new pine needles and the ferns coming alive. We had a wee sit down on a log for a look over at the Mournes which we have been climbing amongst a good bit. Then back into the cover of some deciduous conifers.

This was our lunch stop, quite a few hours and miles later. We found this lovely clearing right on the edge of the park land with a sweet sounding river, that lovely bridge and a farm (with two Shetland ponies) to watch. Toby had his log and we had ours, the ground was littered with bark, mosses, lichen and what looked like hyacinth bulbs (or bluebells?) coming through. Above us was the perfect split between evergreen and deciduous conifers with a little blue sky. 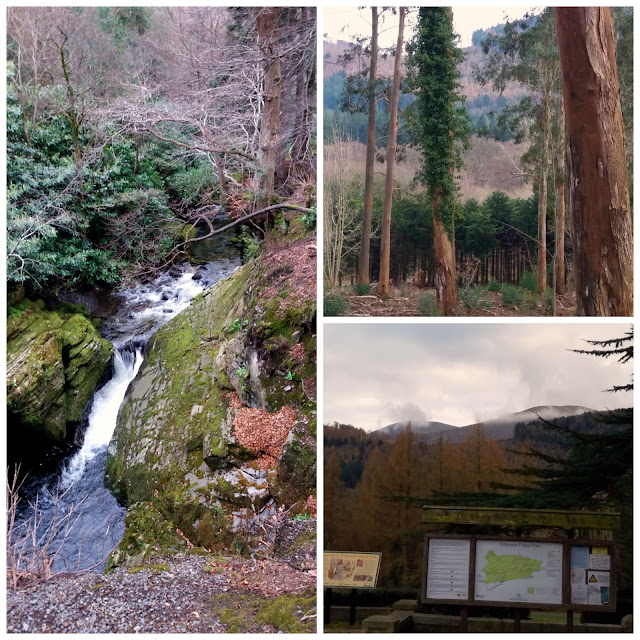 Between lunch and the river we passed through a lot of clearing of trees, large areas of different varieties had been cut down and were stacked really for sell as lots. This the the start of the arboretum area too so there were some lovely surprises such as eucalyptus and rhododendrons. I was starting to feel the searing pain of my strained hip around now and was thankful for the car park and benches we eventually arrived at. Here you can see some of the old pretty walls from when there was a large house here, there are also Game of Thrones plaques (and often groups dressed up) and the large forest park map. But really that view was all that mattered. Then we walked down in to the riverside. 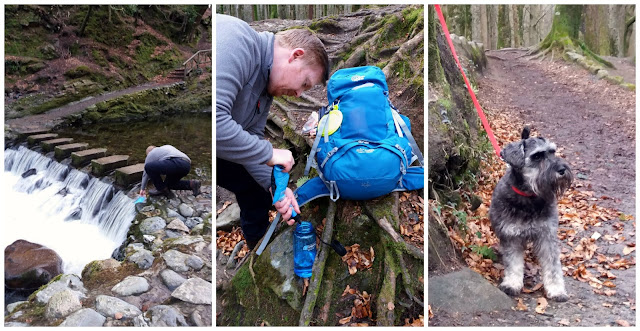 The water of the Shimna River is beautifully clear and fast running and these stepping stones are famous in our wee country. Andrew had little water left so he decided to try out his new(ish) water filter here. It was better than the first time, which was filtering peat water, this was lovely and a little sweet. Toby just stood by like a little trooper and was soon deemed good enough to go off lead for a while. He went a little bonkers at first running back and forth but soon settled into a pattern of walking a little ahead then stopping to wait for us.

I didn't take many interesting photos on the way back, as we joined up with the same trail that brought us into the forest. It was a lot of up hill walking (followed by long descent) my my hip was killing me and I felt sorry for myself. But we did get to see a lovely sunset utterly alone and with only a bird or two singing away. As we eventually arrived back at the car there were bats over head (I love that!).

And on to dinner accompanied with a wee beer (for medicinal reasons of course).

Thus another 13 miles under our belts in preparation for the West Highland Way next month.

What the bloomin' heck happened to February!?
I think someone stole mine; I remember so very little, I've lost time (anyone believe in UFOs?) There are some photos of me out hiking, hiking with Andrew and Toby and again with Andrew in the rain and such but apart from that, I think I slept. Seriously, I think I slept February away though I can see I read some good books - The Handmaid's Tail for instance. Anyway, it wasn't a good month and I can tell you, I'm glad March is here. The back garden has shown me some much needed hope in it's little blooms, that is something I remember smiling over, in the darkness.

But let us not dwell and instead talk of good stuff! We visited the allotment last Saturday what? - YES! We saw our land again after a very long absence and it didn't look too bad. I'm so glad we did all that work in the depths of winter, so cold and warming ourselves up with many a cup of tea. Apart from the field being a quagmire and the 'devastation' of Storm Doris (a little bit of our netting came down, it's nothing) it looks great, how surprising. 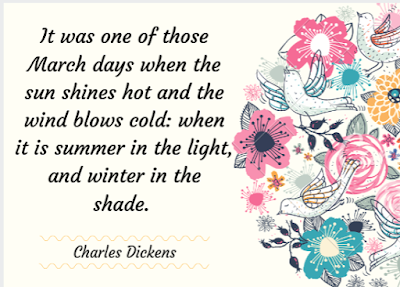 It's not that we fell out with the place but that the weather has been crappy and of course the field was never prepared properly and there is no drainage in place. This year, as last, we're absolute champions of the no dig system and we are going to sow direct as much as possible; in our 9 years at lottie owners we can't see that home sowing and planting out seedlings makes that much difference.

However, one thing we do plant out early is our garlic. We love our garlic and it loves us - 100% germination this year again. Aren't they just a happy sight standing like little soldiers all their rows. 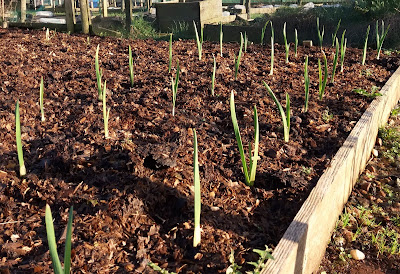 Even had we wanted to do any work or even fork some wheelbarrows of newly delivered manure to the plot, we couldn't. The paths were sodden and these two very inadequate photos try to show. Look, even the slugs were being flooded out! 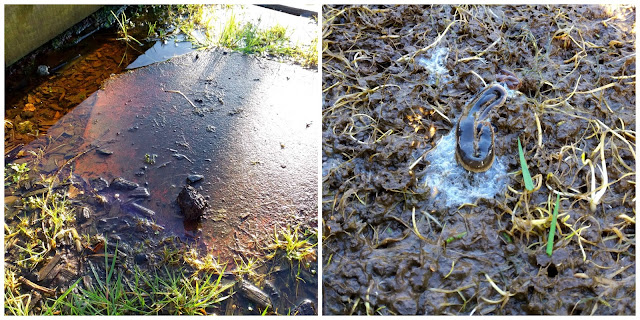 But TRUE JOY was to be found on 14b with our rhubarb patches. These young forced stalks had been so happy to get to the sun that they had pushed off the forcer lid :) We naturally took all these beauties home and I was supposed to make some of my compote and even some compote with ginger - but I've been a crappity mess so far this week. Poop. 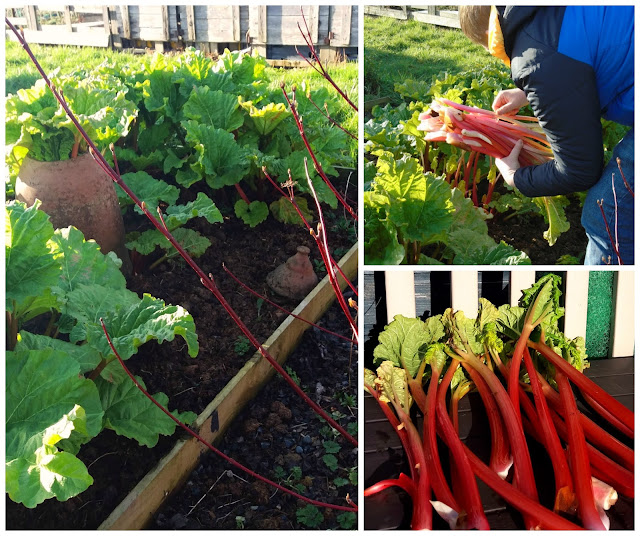 There were also some purple sprouting broccoli plants that I reckon deserve a mention and these glorious little daffodils - what a happy sight. 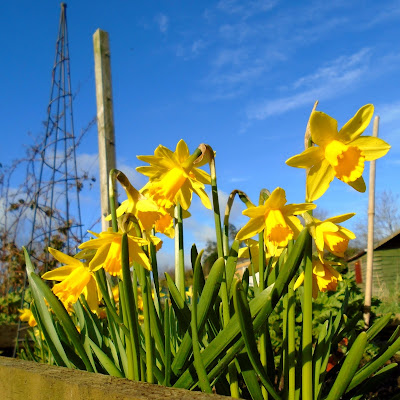 So this weekend we are trying to go for a good hike and I'm not sure if we'll be at the lottie. This hiking lark has really given us a great joint hobby that's healthy and fun. It's just as, if not more, important than the lottie these days! x
Posted by Carrie at 11:20 7 comments: