I fear the allotment may think I have abandoned it, poor thing. The bank holiday weekend we just had ought to have seen me there with my gardening gloves on and my hands busy in weed pulling and seed planting. Alas it was not to be as my mental health took a terrible nose dive and I was lucky to see the sunshine through the half drawn blinds. 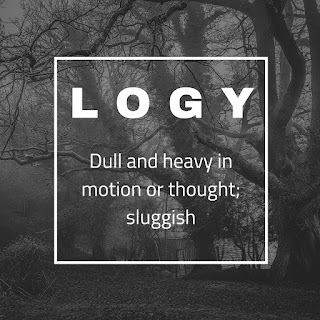 Mental breakdowns don't care if the weather is stunning and you have hopes and made plans. Mental breakdowns suck. They leave me exhausted beyond words and so utterly depressed that my body just can't do a thing and I end up so frustrated and angry that any energy I did have gets burned up and I am left with sleep as my only option! Arrghhh.

So instead of tending my plot I slept. Andrew managed to get there for short periods whilst I was 'busy' sleeping and it is looking quite good. It's a miracle! 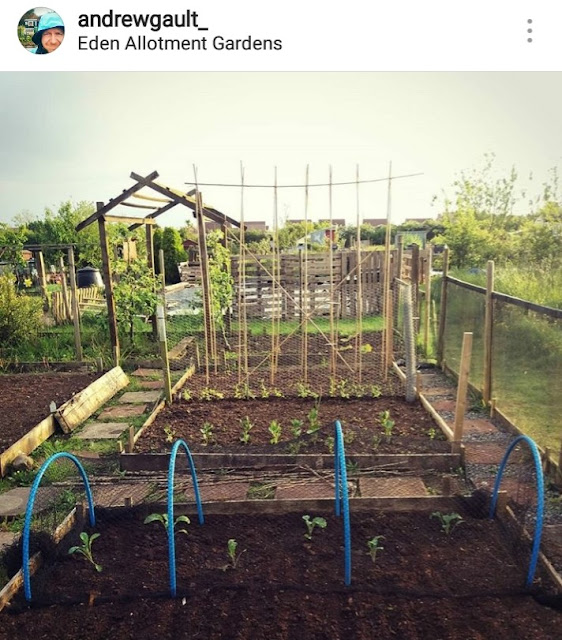 I am so glad I used a Saturday a few weeks back to plant up my tiered flower pot stand, these babies have given me hope and joy every day. Yesterday I managed to drag myself out of the house to the back garden and sit by them for a while - a little burst of ecotherapy goes a long way. 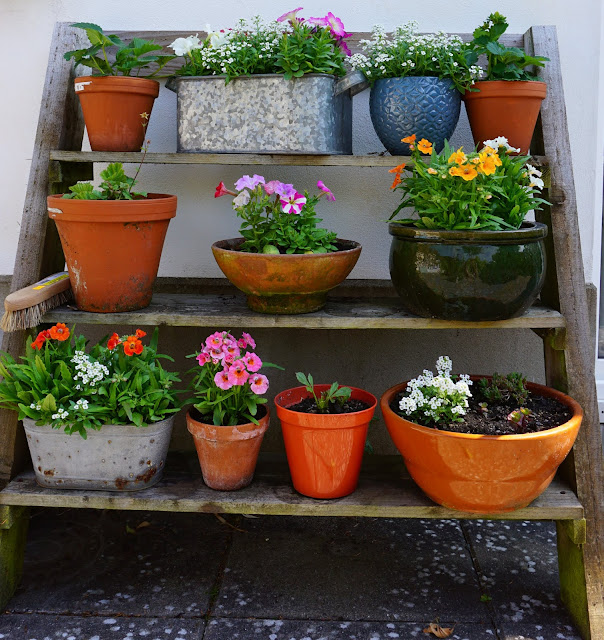 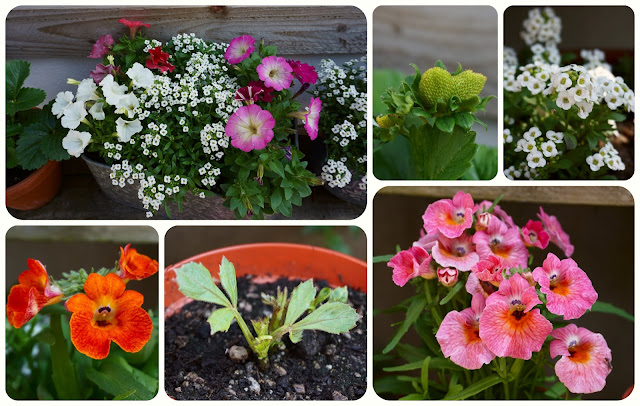 I SHALL see my plot this week at some point, I miss it and I miss being able to share the goings on with you.

But already I have been outside today with my camera and as soon as I am finished here, out I shall go again and get me more Vitamin D 😊 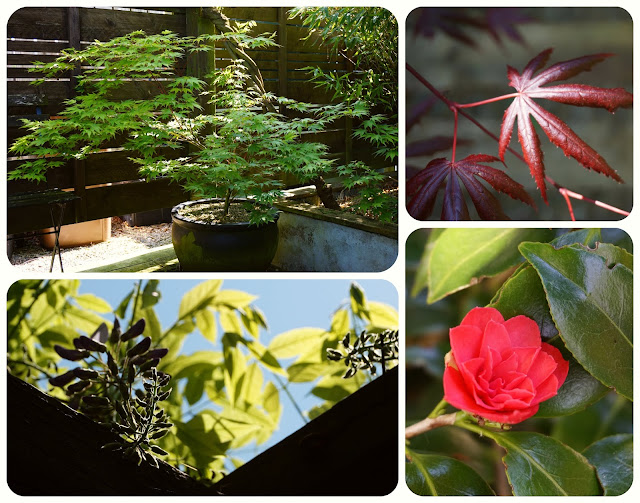 Hopefully I shall write again soon
Your Carrie x
Posted by Carrie at 12:35 6 comments:

Well, it's just as well I keep travel journals as this series of posts has taken way too long. I am sorry. So much has been happening here and it's all been quite stressful and I end up sleeping a lot more than I'd like. So, let's get that journal out and finish this! I walked all those bloomin' miles and I want to share the accomplishment.

Day 5 was a sight seeing day and after the Hell of the day before it was so much appreciated. We visited Vindolanda and Hexham. Thoroughly enjoyed ourselves and acted like tourists for a change :)

But then we were back on the Path by Day 6 and what a day it was - Glorious! We hopped on a bus and got back to roughly where we left off on Day 4 - Housesteads. It's a really impressive place and worth a good looking at but we had done that a few years ago so this time the only thing that mattered was the passport stamp. These only start in May and you are meant to have an official path passport but, so what, we had missed lots in the past and this one went on the map and in my journal etc. 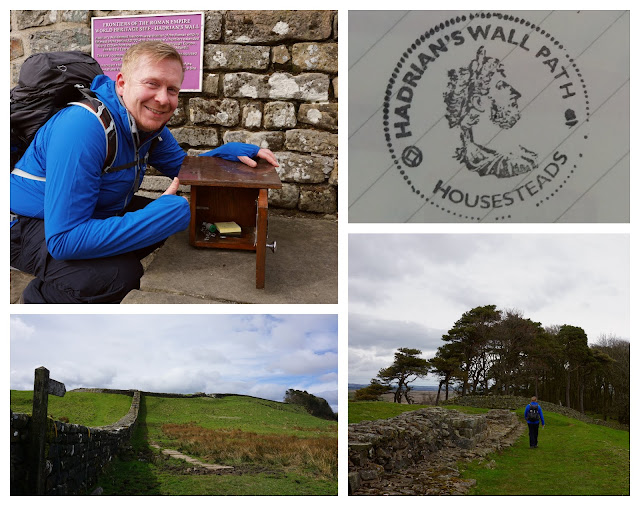 From here (chilliest place in England!) the walking is lovely and it's not too hard. We even had a temple to sit in and have our lunch break; the Temple of Mithras (a pretty odd Roam cult) which was unusual. The altars are copies as there is no protection here and the real ones are in a nearby museum. Then came THE BEST BIT of the whole walk  in my opinion - Black Carts to Walwick. The views were great, we got into the best walking stride yet and the sun burst out of the sky. 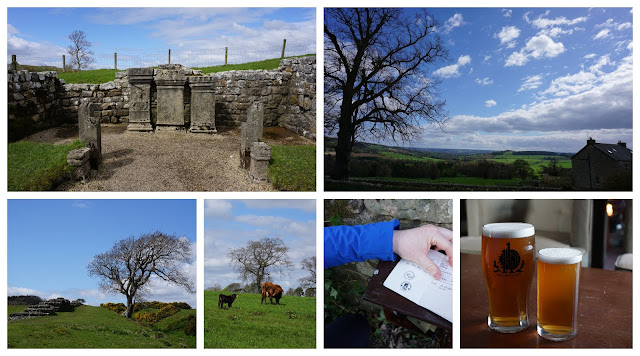 Another passport stamp at Chester's Fort and then onto a pub! Yay! From here the day was over and we merrily waited for an Eco Cab to take us to our next hotel - there was no way I was walking on those fast country roads without footpaths for a couple of miles, way too dangerous.

Day 7
We were once again at a hotel bang on the line of the trail AND it had it's own passport stamping post. This made the day start with a smile, that was until we saw the marker for a recently deceased walker who had died here; as I said, the roads were busy and without footpaths. 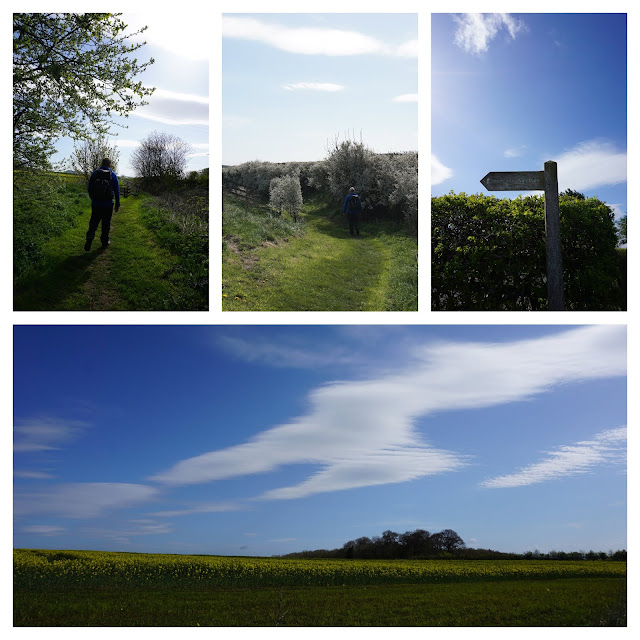 We had many miles to dander in beautiful fields and around farms, saw more Roman stuff (getting boring now, haha) and unusual species of sheep. There was a long section beside a main road on footpaths which was wick but we came to a pub at the end of it and had sandwiches and a wee beer :) In this town was the last of the best wall remains so we detoured and appreciated them then moved on. We ended up in a strange place with loads of security cameras which we later found out was the 'Close House Agricultural Science Field Station' and surrounding land. 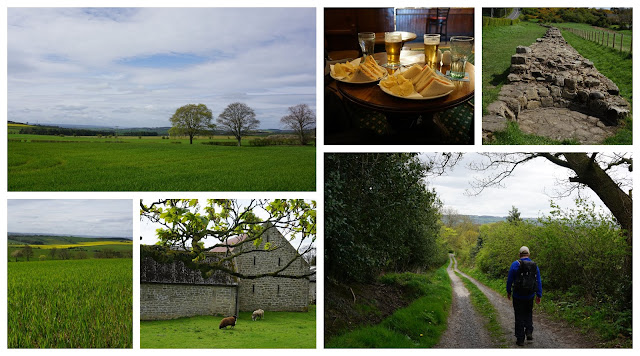 After that we ended up on the truly beautiful Wylan Waggon Trail and saw the river Tyne for the first time. As we moved closer to Newcastle it became busier here and the Path changed it's name to the Hadrian's Way and the Tyne Riverside Park with many children playing and people out with their dogs. We bedded down just off this park and all the pain relief was needed to get me through the rest of the evening.

Last Day
Oh my, good golly, crikey and such. This was the day we thought wouldn't come, haha. The sun was strong and not a cloud was to be seen in the blue sky as we walked triumphantly in our trail shoes (instead of boots) into the town of Newcastle along the riverside and all those famous bridges. What a day and what an assault of the senses - it was so noisy and goodness there were so many people. 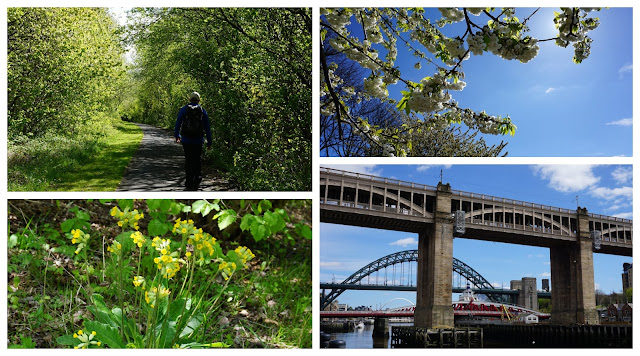 We cheated and I don't even care, we walked to our Hotel and dumped our backpacks. We couldn't be annoyed with them anymore and there is something about almost reaching your goal that both exhausts you and spurs you on to get it done!

With the bags gone we tackled the Metro system and went out to Segedunum Fort and the end of the trail; the glorious finish line and the conclusion of our adventure. It was done, we got our photos taken, looked at the museum and bought t-shirts. The day was so extremely hot though that we soon tired of the very idea of being hikers anymore and so, back to the Metro, back to the Hotel and to celebrate and to sleep. Ah, sweet air conditioned sleep.

P.S. Newcastle?! You are drunk! 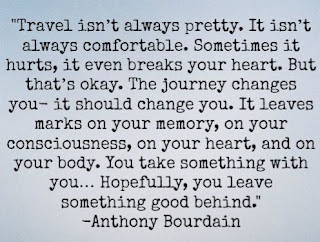 Day 3 of hiking was lovely; the birds were singing, the temperature was warming up, we saw many a lamb and the blossom on the trees was stunning. It was like a fairy tale, and my love for Cumbria was cemented. I have nothing but good things to say about that day and we treated ourselves to a trip off trail to the Lanercost priory cafe, saw the first real parts of the Wall and even came across a young lad's enterprising snack stop. It all ended in a stay at one my favourite Inns, just over the border, in Northumberland. 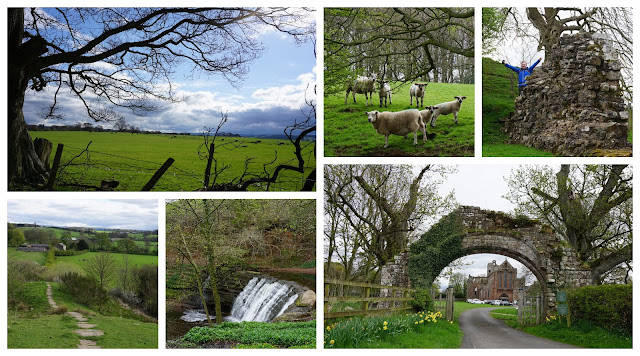 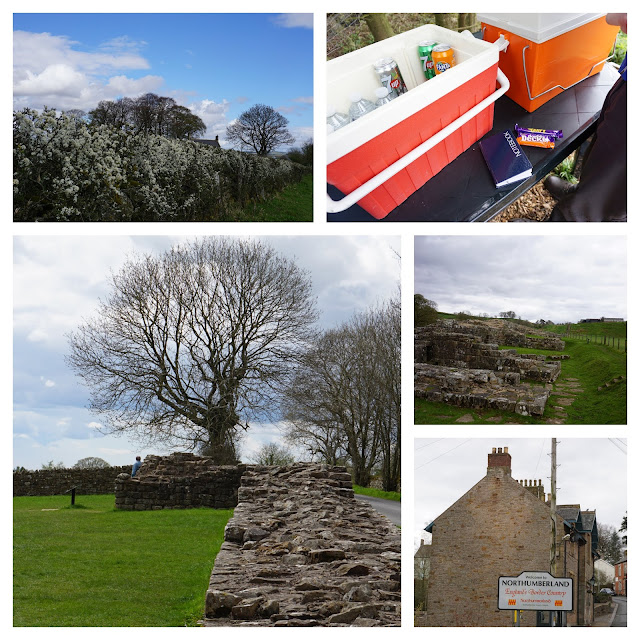 Day 4 was different, very different, though not to begin with. We had a hearty breakfast and though very cold (1 degree), the day was bright and good for walking. It wasn't long until we hit Thirwal castle but then it really wasn't long until the first set of 'crags' ever. Crags are evil steep ups and downs and from a distance they look like waves in the landscape with shear drops down the left hand side. 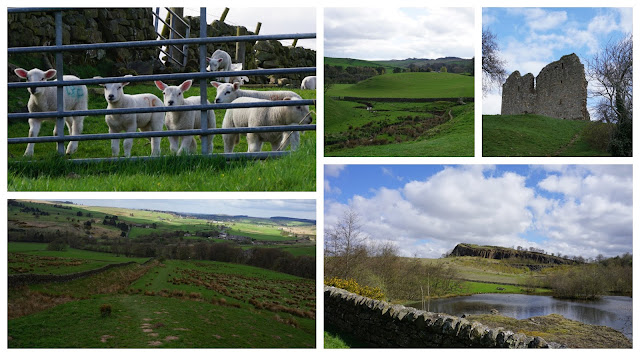 After Walltown came Cawfield crags and a break - boots off, tea and lying down. Then it became majorly poop!! Between here and Windshield Crags I began to lose it; I was hating life, disassociated, unable to speak, to focus my eyes. My bad shoulders and neck were not being helped by all the pain medicines in the world and the tears were gathering. 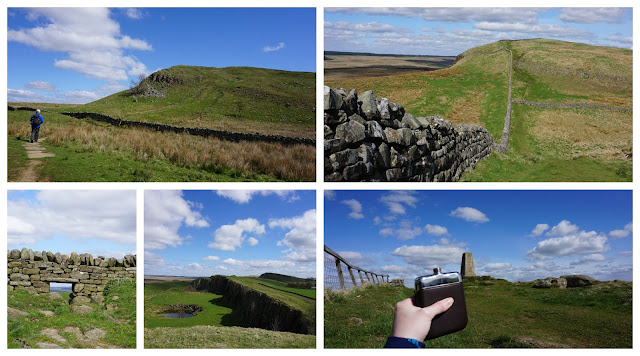 Who was I trying to impress? I had been pushing myself far too hard over the past days and now it was all catching up and overwhelming me. Goodness sake I spend most of my life in this living room! Well now was the time to gather absolutely everything I had and we walked, up hill, slowly and continued on to the highest part of the whole damn walk. NEVER have I been so glad to see a trig point and in the distance a little hamlet - there be beer! 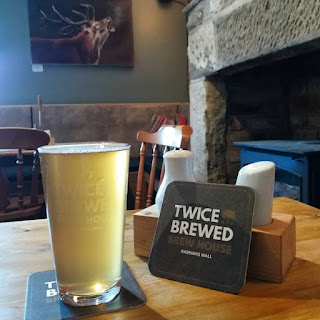 Oh boy, I shall never understand how we got through that day but I do remember the taste of victory in a local brewery/pub when it was over. Then we caught a bus to our next hotel and I slept, it was like Odin sleep, haha. 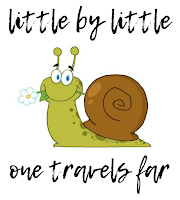 I still can't get my head round it; this time last week Andrew and I were walking into Newcastle upon Tyne in the baking hot sunshine, finishing our epic hike along Hadrian's Wall Path.

But, slowly going through the multitude of photographs I took each day, it is starting to seem like the evidence is there...we did it!

We did it our way too...neither of us believing in the idea that you must do every little bit (even when it is on dangerous roads or through swamps) as quickly as possible in order to deserve the accolade of being a real hiker and earning our badge. The glorification of hardship and suffering is just not healthy!

Heck it was hard enough as it was..and one's health problems don't stay at home when on holiday; you can't leave them at security either. 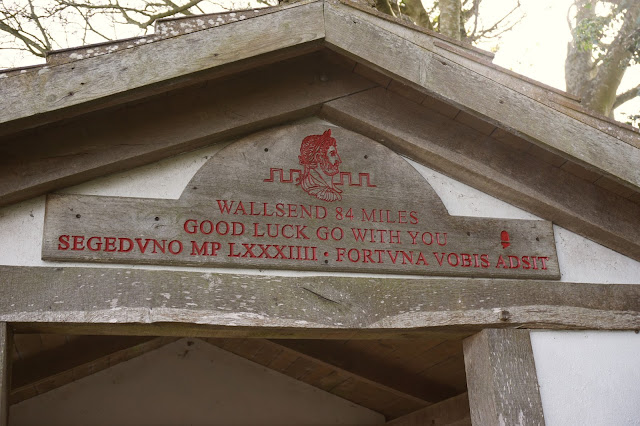 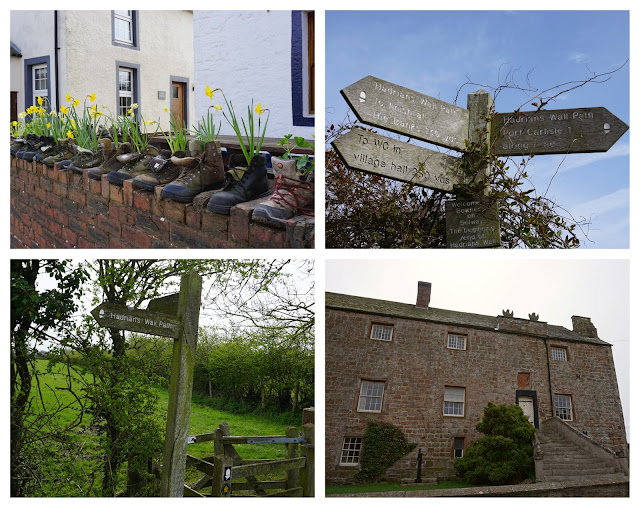 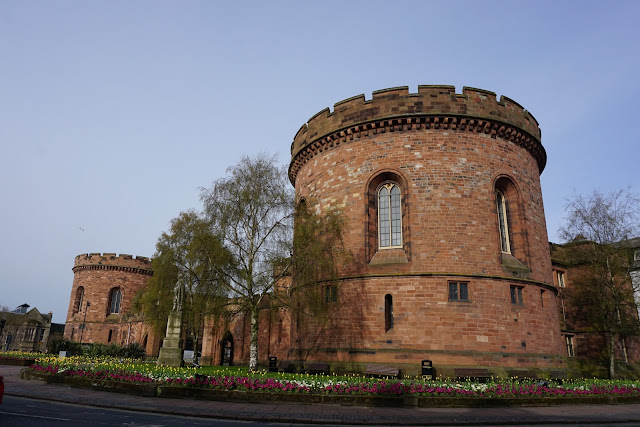 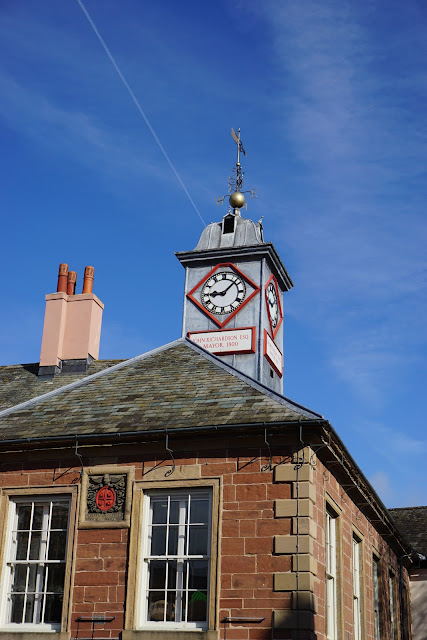 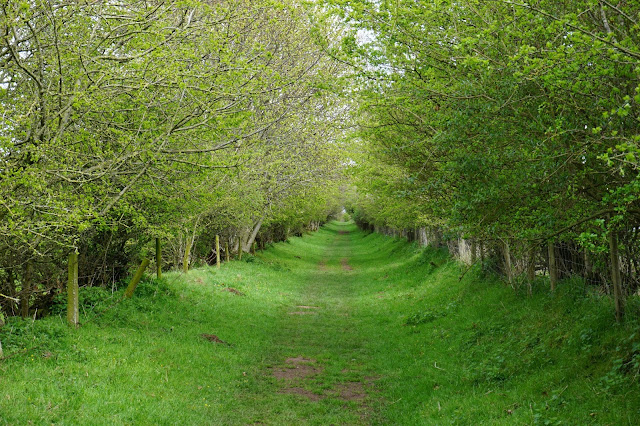 Hope you like the look of our adventure so far. I'm trying not to overwhelm you with photos or we'd all be here all day, haha. Oh Gosh, I took so many.