Ah, yes, the turf stack. This was formed way back in April when we were removing turfs in order to build our raised beds. They all went over into the corner and had black membrane put over them. Over time we used it as a bed/sofa, have had Pumpkins growing out of it and now it was time to get what good top soil there was out of it. We want the space to move the holy trinity of compost bins over there and get another bed in. 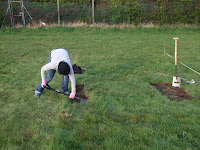 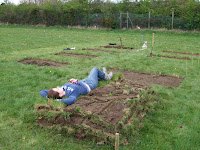 How far we've come. (Okay, these are a little misleading - Andrew was there too, working very hard).

So anyway, I was starting to feel like I really wanted to go home on Saturday, remember I wasn't having a good day (depression wise) and I had just fallen, like the eejit I am! But Andrew suggested the turf stack, knowing how I have a lust for destruction, as much as one for growing etc. I got into that stack with the spade and started hacking away like a crazy murderer of soil! It felt GREAT!

Now to the exciting part..... Andrew made a Riddle. We had been given an old fr 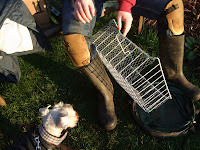 idge basket by Anne (my sister-in-law) and had some chicken wire in the shed. Tie up the two components together and what do you have - an eco-friendly soil sieve! Andrew was in charge of that creation and I dumped spade loads of soil into it. After a good riddle (shake those hips Andrew!) we had beautiful top soil in our wheelbarrow (including lots of worms) and little bits of clay left behind; these we 'dumped' in the hedgerow - it does no harm and will cover over with grass in no time. We worked at that for about 1 hour and made a bit of a dent but more importantly I was in a better mood. 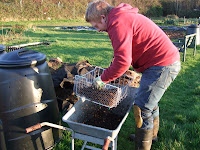 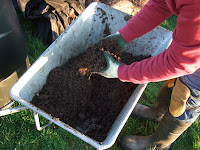 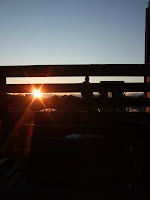 Then came the glory of picking our own food. A lovely box (I forgot the usual basket) of 5 Lettuces, 8 Scallions, 9 baby Carrots and a Leek. Then home, as the sun was in fact setting by this time and it really was COLD. Maggie was even shivering in her little jumper and coat. But look what we went home to, (after Andrew made it) looks ridiculous - tasted great.

All of it grown on our very own plot A24a, though that was the last of the potatoes which is quite sad.