I was so cold, as I've mentioned, hopefully these photos will give a better indication of that, oh, and the knowledge that was wearing 2 pairs of socks and still had cold feet! 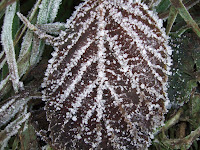 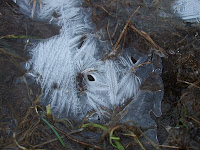 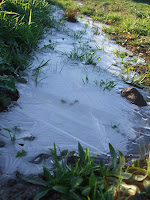 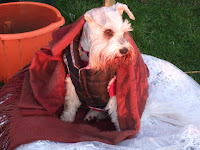 By the time the last one was taken the sun was going down, as you can tell from the red glow on Maggie's face. Even with her clothes on she needed that blanket wrapped round her. Poor thing.

Unfortunately there really wasn't much happening around the plots, we were there almost on our own and I suppose the sane people were all at home, warm cosy home, with tea and coffee and sofas...

However there was one other hardy fellow, whose name I totally forgot to ask (duh!) working away, very hard indeed - I suppose we all were that day; stand in the one spot too long and you'd freeze. He had worked miracles on these 2 areas, digging over the soil, tidying the edges and getting rid of plants that had given up the ghost. 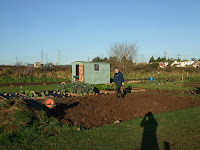 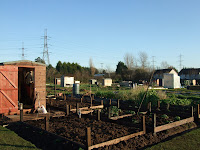 So after our mammoth task, of Turf Stack Destroying was completed and we had had a done a little looking and weeding around, it was time to go. At home, Maggie's body warmed up just fine but her ears!.....they took a bit longer and needed some assistance...... 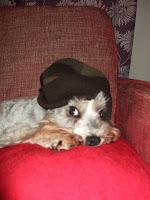 By the way, I'm still not too good today again, but head up and fighting on.
Posted by Carrie at 10:51

Email ThisBlogThis!Share to TwitterShare to FacebookShare to Pinterest
Labels: Around the plots, Maggie, New people, Weather