Baby Carrots, Manly Scallions and the Case of the Disappearing Beetroot

It's all about that process of planning for a new year (stops me going mad in the winter); picking seeds to order, looking into brand new areas of Allotmeentering (Apple/Pear/Plum Arches!) clearing out beds and the soil given a bit of tender, loving, care. We've been doing this slowly for the past few weeks, but Saturday saw us clearing out, pretty much, the last bed. We still have a few Parsnips in one, Leeks in another and Spinach in one.

The 3rd bed on the right contained some Cabbages, Beetroot (Holy Moly what did he do with them????), Baby Carrots and Scallions (which where under a poly tunnel) and Parsley.
Andrew cut out the Cabbages (4 or 5 of them) before I could get near the place with my camera and I am guessing he also did something with the Beetroot at this time too. He had me distracted, in the shed or something - what happened to the row of Beetroot??~ I fear it may be in the compost bin! But no, surely not!? Then where are they all????? There must be a perfectly good explanation, I'll find out when he gets home. 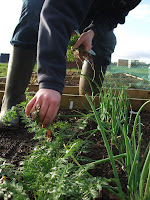 much more) and we were surprised that some actually looked good. They ended up in the Lottie Soup, which I still have to tell you about and I swear they were packed with Carroty yumminess; as if all the carrot flavour they would have had as big specimens was concentrated down into a tiny root.
The Scallions however were wonderfully tall and as good as any we've had from the Lottie. I highly recommend the mini Poly Tunnel (or they might be called Sun Tunnels officially, I can't remember) to any and every Allotmeenter out there. A good buy indeed.
The Parsley plants are still there, though I cut a big one (that had been under a large water bottle) right down and Boy was it good. Again it went in the soup but we also had some with a stir fry - fresh herbs are the way to go, if you can get them to grow in our climate (I'm still upset about my Basil and Coriander disasters!). 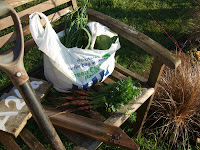 So another bed ready for thinking about. I think it will be all Root Vegetables next year, if my hold on the rotation scheme is right. It was a Brassica bed last year, with some Squashes but they didn't do very well. I'll have to draw out some better plans so I can explain things clearer, eh? And I will get that Lottie Soup written down....
Posted by Carrie at 15:40