The wonder of Vermiculite

Well the mystery for me deepens, I have access to 4 gardening/ allotment books in the living room right now - the Double Glazers are in and rampaging all over the house and I certainly do not want to get the way as I have a fear that something isn't quite right at the moment and they're sparing me the details, eekk!

So I have looked up trusty old Wikipedia and there wasn't much info there, chemical breakdown and a list of things it's used for ~ yes, we know it's used in horticulture and seed germination we want to know more. I have even gone to the TVA -The Vermiculite Association! How boring would it be, to be a member of that club! You can go too, if you're that way inclined.

So I turn to the bag the darn stuff came in. With thanks to Keith Singleton Horticultural Products...... 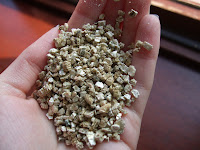 'Horticultural Vermiculite is produced by heating volcanic rock to tremendous temperatures which cause it to exfoliate into an extended cell formation. Vermiculite absorbs large quantities of water and as such is useful as a compost additive where it can replace a proportion of the peat content of soil-less composts or part, or even all the peat in a soil based compost.

Vermiculite is also used to cover seeds generally at the depth roughly equal to the size of the seeds being covered. This is a good aid to germination and does not distort the young seedlings.'

So, basically it is as Andrew told me at the very beginning -" you put it over the little seedlings and it doesn't weigh them down and they're less likely to rot".

Email ThisBlogThis!Share to TwitterShare to FacebookShare to Pinterest
Labels: Soil