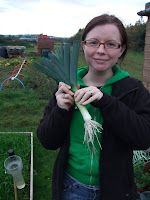 After much weeding and tidying up on the plot on Saturday I got bored. Thus the 1st Leek was harvested - just because I wanted to. I wouldn't have won any prizes for its size, I didn't give it a chance, but it was beautifully formed and smelt very Leek-y. Sorry I can't give you the name of it - I've gone and lost my bit of paper with all the names of everything!! 'Carlton F1' sounds about right, but I'll try and find out for sure; 'Musselburgh' also rings a bell..... 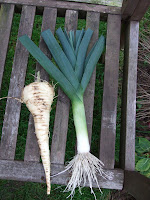 I have found out now that it was/is Musselburgh', Andrew has admitted that he took my list and now it's gone. Hummmph.

Well, after I lifted something new, Andrew had to too. He has wanted to lift a Parsnip for ages and so he got his wish. Within an hour we had the tasty-est of dinners; mashed potato and parsnip with leek - kind of like a very bastardised champ. It was so good, and very comforting to eat. I did take a photo of it but it doesn't do it justice, you'll just have to grow your own and make it yourself!
Posted by Carrie at 18:03