Squashes - not so good 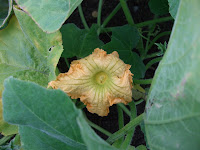 We grew a few squashes, 4 I think in different beds and they have all taken off well as plants- big and leafy, and have had to be cut back a couple of times. They're 'Avalon F1 hybrid' and they aren't making any squashes. There are loads of flowers all over the show but no veg and they really ought to be plumping up now and looking, well, good enough to eat, which was the objective. Nothing though, not a sign of even the smallest, most pathetic squash.

We have done something wrong here I think, wrong conditions, weather (can't be blamed for that), have we fed them the wrong stuff, too much of it, or not enough? This is one set of plants that have disheartened me. I saw someone else's plot - they had a big squash growing away merrily and I wish them well, I do, but what about ours? Squash is lovely and we eat lots of it in the winter, which let's face it, is just there, lerking around the corner. Darn it, we're going to have to go to bleedin' Tesco for them aren't we. I don't want to talk about it anymore.....
Posted by Carrie at 11:59