Slugs and Snails and catepillars...

It's not often I get near any of the bugs on our plot; Andrew is very effective at 'disposing' of them - he is in fact generally, a heartless bug killer. But yesterday in our front garden I noticed a snail (which is still alive somewhere) and had a thought... Maybe I'm mad, but in Paris people pay good money to eat these delightful, slimy, squidgy things and I'm no expert but are snails not slugs with fancy shells on their backs??? My idea therefore is an EU initiative wherein allotment holders can gather up their slugs, ship them off to Paris as 'food' and make a profit out of the blighters. Et voila, dinner, Escargots, and you don't even need to hoke them out of their fiddly shells.

On the other hand there is something delicious in seeing this... 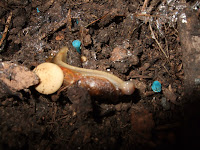 Dead. Gone. Succumbed to the lovely blue pellet on the soil.

Slug : "What is that? it's a pretty colour, I wonder does it taste nice, ummm, no! 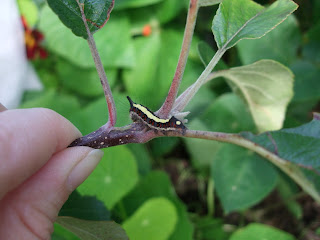 Ohhhh, we found this cool caterpillar. We have no idea what it is but it was so weird and special to us that even Andrew was persuaded to let it live, though in the hedgerow, not in our plot. Look at it up close - there's hairs and red bits and a horn thing. Cool!

All the other cabbage white caterpillars that we have had, never got a chance to be photographed and viewed by the world - Andrew, need I say more?

On a really positive note, we have millions of worms on our plot, no need for a photo of them, we all know what a worm looks like, eh? Some of them are so big! I choose to believe that if you cut one in half (accidentally!) it turns into two worms and I won't hear anyone say otherwise.

We also found a lot of ladybirds everywhere, they did a fantastic job on the green aphids etc and they're so pretty. It had been a while since I'd seen one, now they're all over the place. This is interesting, a ladybird larvae, I'd never seen one of these before. This picture was taken way back in June by the way, so I'm sure he's all grown up by now.
Posted by Carrie at 10:50