I was at my Lottie (on Monday)

Okay so I'm only getting round to writing about it now - but it did happen, I was at my Lottie. Here, in Northern Ireland we had the 11th and 12th of July off for the Orangemen parades etc so Andrew was able to have a shortened week at work (I can't believe it's Friday today) and we spent some lovely extra time together. It was also sunny, not sure where that sun has gone now though as we have had heavy rain ever since.

So, yep I was weeding like crazy, 5 trugs full to the brim; that's a lot of weeds. And then pulling out a good few plants that had seriously bolted, a wheelbarrow full in fact - eek! All the Rocket had bolted and something else which escapes my mind at the minute and they had to go. Half of the Broad beans were also lifted having done us proud, and the goodness filled (nitrogen) roots left in the ground for the subsequent planting of the perpetual Spinach. 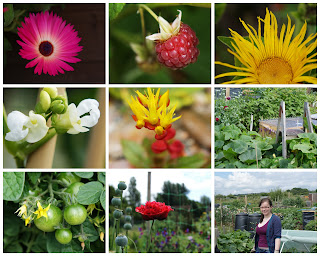 Proof, if it were needed, that I was in fact, there!

******
I started this this morning but, there is no chance of me finishing this post today, I have too much to say and no energy to say it. I went for a walk today by myself, my 2nd solo one in the past 2 weeks, after over a year! I thought it would make me feel good, proud and bouncy - ready to take on all those little jobs I have wanted/needed to get done, but instead I feel terrible, I pushed too hard. And now, I can barely talk, move or give a damn about anything. I have more though, and will be happier the next time I assure you.
Hugs galore - off to eat some beetroot, cabbage and erm, something else from the lottie. Andrew's cooking  :)
Posted by Carrie at 18:03