So, I made it to the Lottie on Saturday for a wee while (about half and hour, before I had to go home) I'm sure you'll be glad to hear.

I headed off to see the new field ~ 'D', see if anything had started there. R 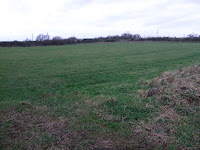 emember I told you it was soon to be released and was going to be totally organic? Well here is how it looks now, this was where Maggie just to go for a run and chase and where I would lie down in the Summer and watch the clouds roll by. No one else ever seemed to go into it, I'll miss it when it all gets turned into Allotments. But one must not be selfish ~ think of the joy that will be in that field, the new adventures, the lovely food and flowers and the quirky individuality of new people's sheds and plots. Photo fodder if you will. 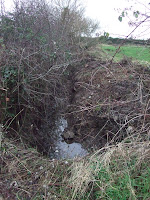 The only thing I noticed was a shuck had been dug around the bottom edge of the field (between it and Field B. And another, by the way, had been dug down the side of Field B, by the hedge, between that field and ours. I desperately hope that the drainage situation will get sorted out soon. It's such a squidgy mess there.
I suppose one good thing is that a large official sign has been erected in the car park, urging people not to use the paths with their cars between October and April. I hope that is just for now and in the future we will get proper roads laid down ~ only for the fact that, at times people will have to take their cars to their plots, to off-load large, heavy items, or indeed get a shed delivered. But patience is a virtue ~ we'll get there in the end.
Posted by Carrie at 11:35