Praise be to the next door neighbours!

You may remember that a while back Andrew and I were desperate to get our be-gloved hands on 24b, the half plot adjoining ours. It was tired and let's be honest, neglected, no one had seen a sign of it's owners since September 2008. However over the past few weeks, Mark and Charlene had given over a majority of this plot to friends, keeping only a bed for themselves. Theses newbies ~ John, Don and Katie have been going mad and the plot looks fabulous now. It's almost unbelievable, especially with the cute shed and mowed grass. 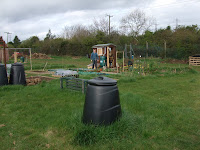 On top of that, Austin, on the other side of us (A13) has attacked his overgrown pro

blem with a much more dramatic solution ~ FIRE. Yes, he has burnt the ground where last year he had grown tomatoes (which unfortunately got terrible blight). And, again, last night, with no camera, another strip had been done as well! I hope he is going to get back into it again soon, it's so much nicer to be surrounded by plots that are bulging full of produce, than empty sad looking ones. It's great to see something being done with these patches of land, they have so much to offer up if the time was just put into them.
Lastly for today, we had new Allotmenteers turn up on Saturday and take over one of the scariest plots in Field A, number 22 (in between Gary and James). It took them all day to strim and cut back the thick weeds (which were up to my chest height) in this full plot area . The sun was baking and they must have been utterly exhausted. Under it all there are 4 or so good sized raised beds and I was told last night they have put down weedkiller everywhere but in a few of these beds. I don't blame them, I'm surprised they didn't cover it all in petrol, set fire to it, put said fire out and cover it over with black plastic until next year. But NO, last night (I hadn't my camera) they had planted cabbages and strawberries out - they're brave hardy people (or fools, maybe, hehehe, only joking). I really must find out their names, I didn't go over on Saturday because I wasn't feeling well, but I hope to see them again soon.

Email ThisBlogThis!Share to TwitterShare to FacebookShare to Pinterest
Labels: Around the plots, Field A