Gnomes ~ the Marmite of the gardening world

Love them or hate them, gnomes are everywhere and it looks like it's going to stay that way. The RHS high ranking officers and indeed all known members are likely to be feeling sick right now and many of those who have passed away will of course be spinning in their graves. I may even get hit by lightening for what I am about to say.......I like gnomes.

Yes, it is a painful truth. I find them funny, I have brought one in the past (for purely ironic reasons) and for Andrew's 30th birthday party bbq on Saturday he was given 4, yes 4 gnomes as presents. We can both see the humorous, ridiculous nature of these strange little men who guard our plants with their lives when we aren't looking, so we took the presents with the spirit they were intended - to be silly.

I do have to say though, I am rather taken with 'Gavin', he with the orange hat and leaf rake, he's staying in the back garden. By the way, we were forced by this tipsy gift giver to name the gnome before he went home; Andrew came up with 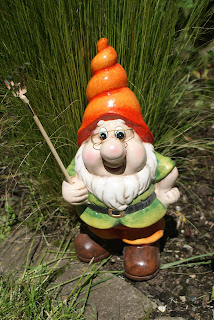 a wick name, I came up with Gavin and it seemed to go down much better to the drunken mind of our friend!

Think what you will be they are there on the plot (and in the back garden), they're queer and they're proud.

The birthday bbq was scheduled to be held at the Lottie but the weather was so bad (especially the wind down there) we had to abandon ship and take the party home to the back garden. It actually turned out much better ~ we ended up with 3 bbqs going at the same time, a lot of other food stuffs and seemingly millions of bottles of wine, schloer, water, coke (in all sorts of guises - coke zero, diet coke, regular coke and a tin of Jack Daniels with coke!!) fanta and beer. I was able to have a proper moment where I got everyone together and we sang to Andrew, popped party poppers, he blew out his candles and champagne was opened. It was fun sitting in the garden under a gazebo, surrounded by tea lights in tiny terracotta pots, with balloons everywhere, wrapped in blankets and a fire going in a brazier. Especially with the Hubby sitting there wearing the big flashing badge I bought him, just to remind him he's old now, hahahaaha.

*****
Tonight is the AGM, I am not looking forward to it, I think some people may lose their cool, eeekk! Plus today is the nicest day we have had in a long time and we're going to be stuck in a meeting all night, why does that have to happen???
Posted by Carrie at 12:25