I worked on 14b over this lovely elongated time off with my Hubby. We have been thinking again about keeping it *sigh, everyone rolls their eyes*. We've realised that without it we wouldn't have our pumpkin bed, or the rhubarb, blackberries, all the cut flowers we've invested in or room for that potager garden Andrew really wants now that the back garden here is finished etc.

So...
Tuesday 15th July
We still only really touch the lower half of the plot as the top half has the pumpkin patch and not much else to worry about. There had of course been some work done already but as I said yesterday, I didn't have my camera with me only my phone and the battery was hanging on for dear life. Hence, there are no photos of my work until Tuesday, which is fine by me as when you see the before and afters I do have here you may need a cup of tea to calm down :)

* My first task on Tuesday was to clear the poor roses and dahlias; I hadn't been over there in weeks and WOW! it was a disaster. All that lush green wasn't new happy growth on the plants as I thought, admittedly from a far, it was a weed infestation!

There is still more work to do along the left hand side but Andrew weedkiller-ed the rest of the back patch - I mean look what is right on the other side of the divide! It's simply a wild meadow over there and I just can't keep on top of all those seeds and weeds coming through! Arrgh. I hope this half plot gets a new owner soon.

* The next job was to tackle the very much failed summer raspberry bed. What a disaster - the newest canes didn't take and whatever disease they had attacked the other older summer raspberries and now we have just one plant and a few offshoots :( 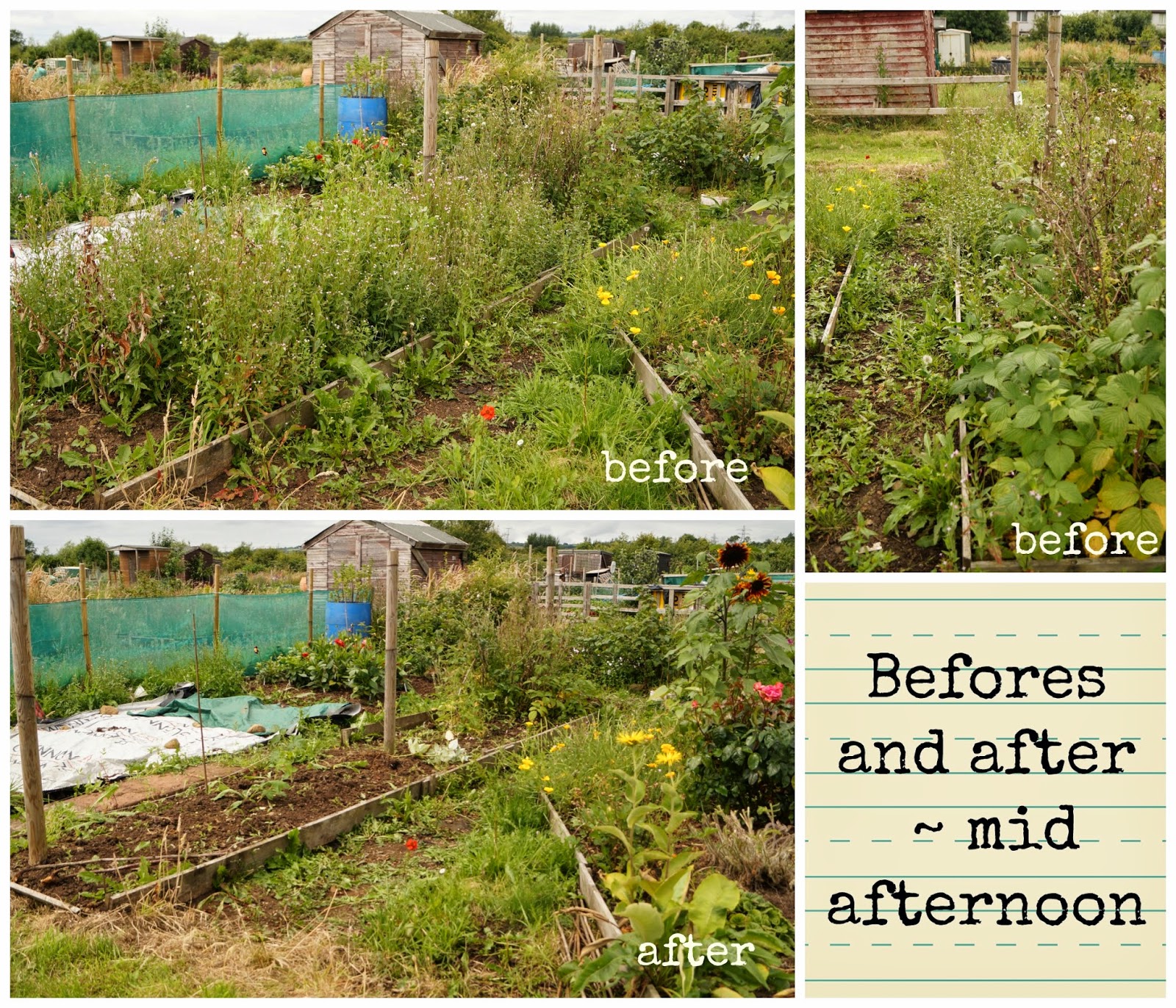 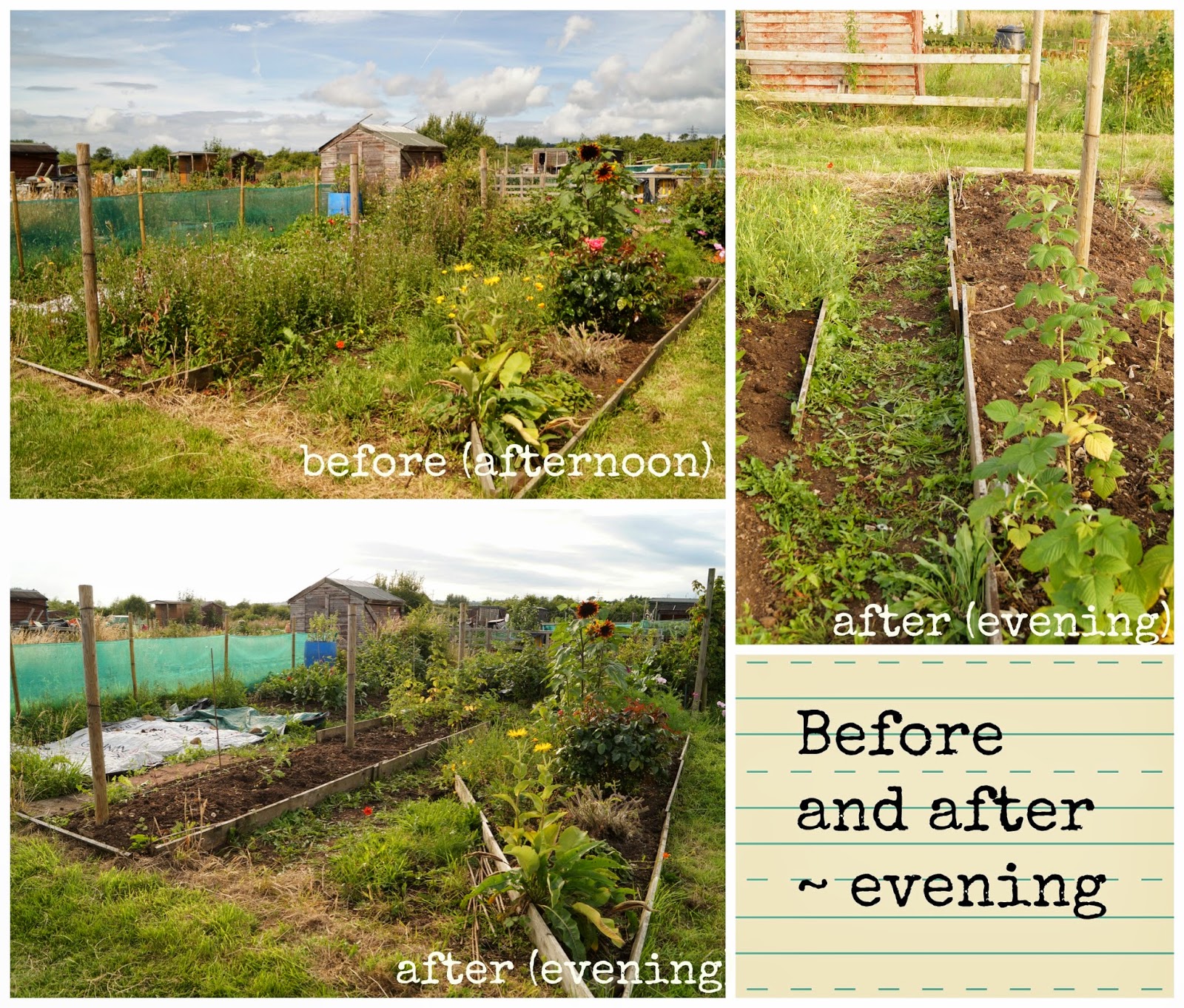 Utterly back breaking work but so worth it I hope, if nothing else it looks better than it did :) Those paths have weedkiller on them too, the grass and dandelions and thistles are so deeply rooted under the black membrane it would be impossible to ever be rid of them otherwise! I'm pretty sure it's organic weed killer so don't go writing nasty comments, ;)

* I also picked more, yes more, red gooseberries and made another batch of jam/jelly/ to put away. These plants are just givers alright, though I had to frighten a bird away from this one, he was only scavenging on the ground but I had things to do :) 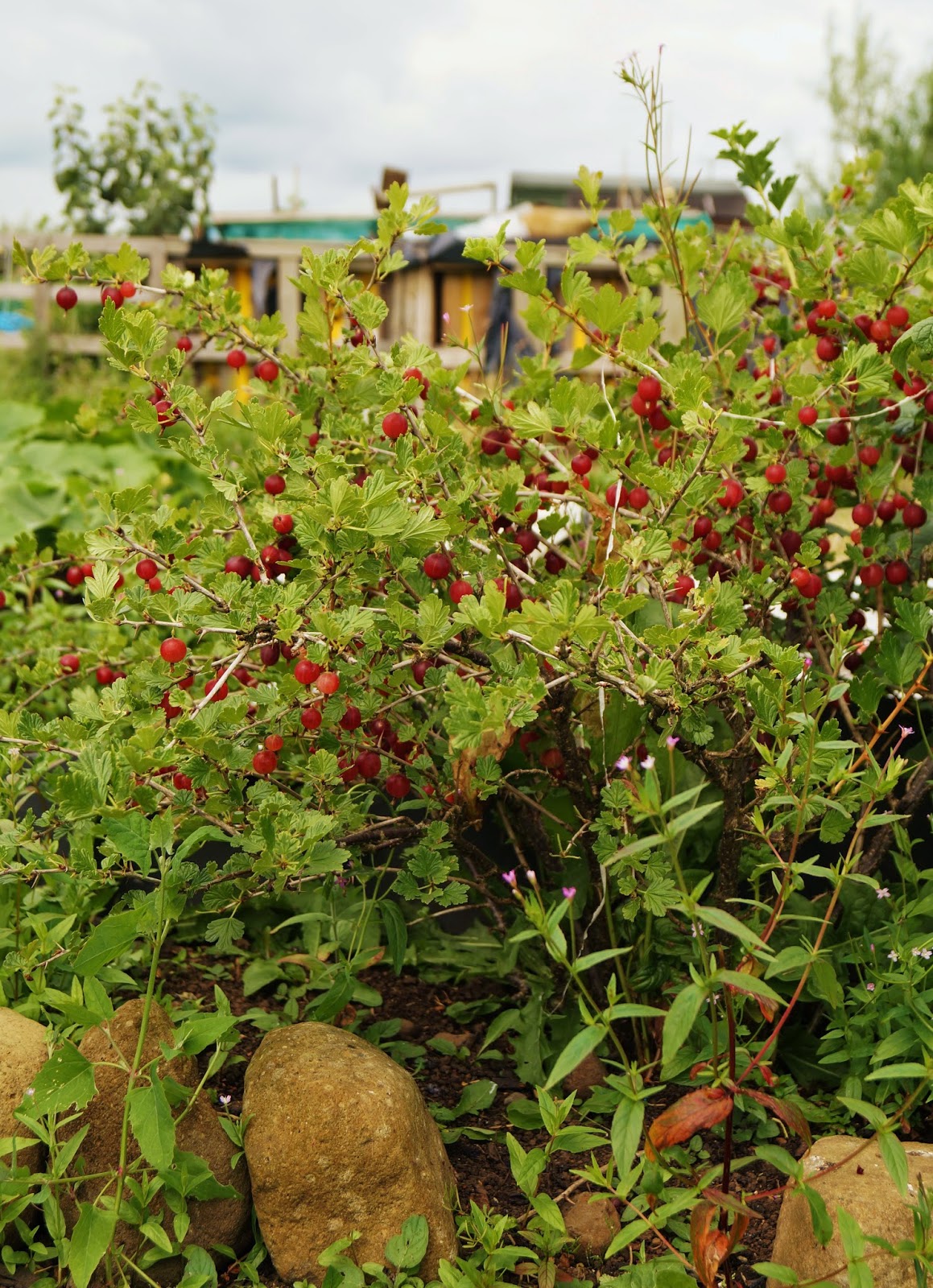 I have lots of pretty pictures to show you of the flowers in the plots and stuff just around the place but maybe I've said enough over the past few days ~ don't want you getting too bored with me!

Love and hugs
Your
Carrie
Posted by Carrie at 12:15