This pretty much ruined our Easter holiday (it's taken me until now to write about it!) - so you better blasted well like this, hahaha.

Andrew was determined to get something done with the front garden to stop cheeky children and the very naughty postman from taking shortcuts across it. I must point out the oddity that is 'the strip'; the long section of grass that runs along where the streetlight is - we don't own that - the people behind us do!!

So you can see Andrew where is standing in the first photo? This is the spot that we wanted to plant our tree, it would have looked lovely and would have blended in well with the back garden, a little extension of gorgeousness over the back wall. Well it was not to be as centimetres under my dear hubby's feet was about a ton of concrete :( Poor thing spent hour after hour with a sledge hammer and a crow bar etc, but it just wasn't going to work, the poor tree, had he got a pocket dug out, would have been living in a stone box with nowhere for its roots to go - it simply wouldn't have lasted. 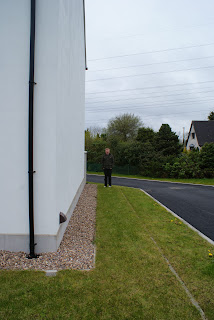 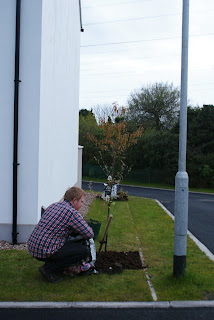 Plans were changed and the tree was brought forward to a more suitable place. It's going to be a real beauty, at the moment it was sweet little white flowers on almost bare stems. I say almost bare as there is gorgeous new fiery growth up top and even newer leaves that are a lovely silvery green down low. It's an 'Amelanchier Canadensis' also known as a June Berry. It was purposely picked for it's Autumn colour, but in June it has edible berries for human or birdy consumption. 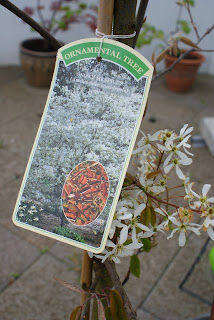 So the front garden wasn't quite as simple either. First Andrew turned all the sods over and laid them neatly down again. (Under there lays concrete and stone and builders' rubbish - ggrrr). The first attempt of weed suppressing membrane wasn't great - the stuff was just too thin and obviously any weed that cared to would have just grown through it. We needed heavy duty stuff. 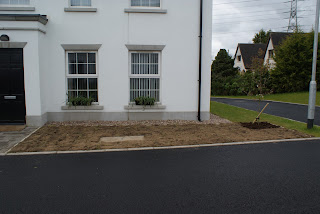 In amongst the prickly atmosphere I came up with a good idea :) We needed to create a channel the whole way around the edge of the garden to give the bark mulch that was to come an area where it could dip down and not just blow out onto the road. So another trip to the garden centre was required and by now I ought to point on, we were well into the 2nd day! 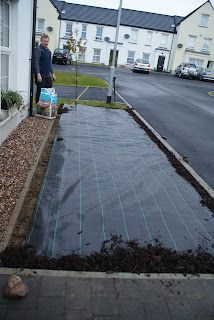 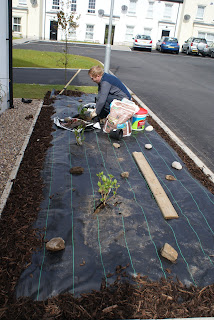 But! things were looking better and the new membrane is a beast :) Once down Andrew planted our lovely Hydrangeas along under the windows, they are going to be beautiful red ones and perfect for a seaside location and for stunning single blooms in vases. In the second photo above there is a BT box in the ground just where Andrew is so that had to cut out too for access. Damn thing doesn't actually look like a beautiful feature in the garden but such is life.
﻿ In clumps ever side of it and towards the road, box hedging plants were arranged in groups. The idea is that when they are older and mingling together they will be trained  and pruned into stunning Japanese Cloud formations. Loads of Pine Bark down; the smell amazing and viola! the finished new garden - now I just have to most impatiently wait for it all to grow (whilst outwardly appearing very clam and at one with nature and her slow ways).
I shall chat again later as today is our 4th Lottie Anniversary and I have a present to give to a lucky reader :)
Posted by Carrie at 12:18