Something that Lawerence, the owner of our Gite in the North of Brittany, told us somewhat surprised me. He said that they don't really have a winter where they are and he cuts the grass every 2 weeks all year round! Many years there are just a few weeks were the frost comes and then it's the eternal growing season again. So that made sense of the fact that everywhere you look in Brittany there are artichokes and maize and cabbage etc in large fields, all at different stages of growth. 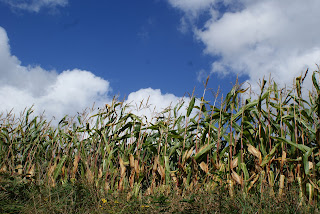 I fell in love with the artichoke flowers that were for sale in the florists and were often to be found in abundance in large vases outside resturants. (Far better this than eating them - yuck, personally I HATE them). 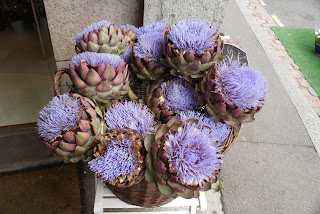 It's also no wonder that most private gardens have their own vegetable area and everything looks fabulous even though up here at home, they would be over by now. Even caravans on holiday resorts have there own tomato plants growing outside - it's inspirational.

Of course there was no getting away from the fact that it was September and thus it was apple season and cidre making time. All along the sides of roads were apples of all varieties and the supermarkets were no different. Such pride in the apple was lovely and every apple I ate was a delight (even the ones we stole!) Yep, Andrew went scrumping as it was just a shame to see so many apples potentially going to waste, especially when we were pretty sure they were Royal Gala. 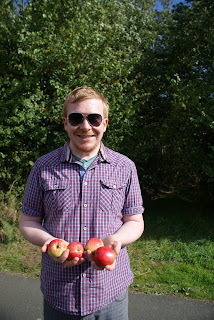 Usually on holidays we love going into the local markets to see all the vegetable and fruit varieties and this time was no exception, though to be fair, the supermarkets are amazing as well in their variety and freshness. Here are a couple of gorgous displays from Quimper town market, that is one thing you will always see when it is a personal stall - attention to detail and everything lovingly displayed...it was also the cool place to hang out if you were a student! 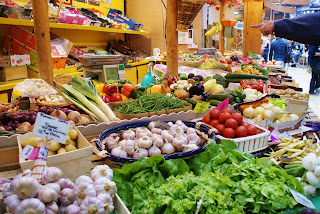 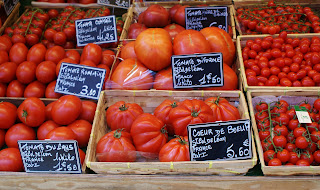 Don't want to bore you so I shall write another French piece later in the week, hugs for now xx
Posted by Carrie at 11:09