I went outside yesterday {sort of} by my own volition and did some clearing up, brushing the deck and clearing away fallen branches and millions of leaves. All due to the power of the Snowdrop clump.

Toby likes to run round to that hidden area of the garden to have a hearty sniff and pretend he's being a good boy and doing his morning pee pees, but yesterday I followed him to make sure he 'went' and THAT is when I saw them.....glowing ethereally in amongst the detritus. They are the happiest part of February, don't you think?

Hours later and with the air a fraction warmer and the sky still bright I was drawn back to them (via my bedroom to put on lots of layers) and tend to them as they justly deserved. Here, friends, is a photo of HOPE, literal hope. 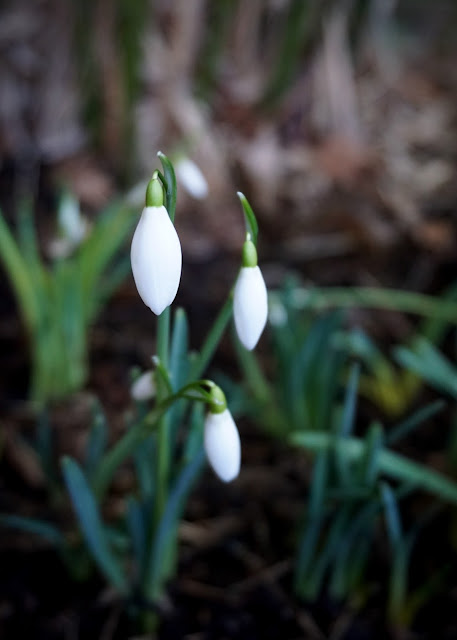 Once I got my photo a massive panic attack had hold of me and that was the day ruined but you know, it was worth it.

Today I look at the meaning of February to me - yes, I'm Northern Irish so the Celtic Imbolc celebration does matter to my soul...I would like to cleanse the earth at the allotment by walking around it with a candle (or traditional flaming torch) but I'm not that much of a hippie. Instead, in my mind I have cleared the site and will consult Andrew on drawing a new plan.

P.S. We have 6 more pots of snowdrops 'Galanthus' for the front garden waiting to be planted.
Posted by Carrie at 14:05